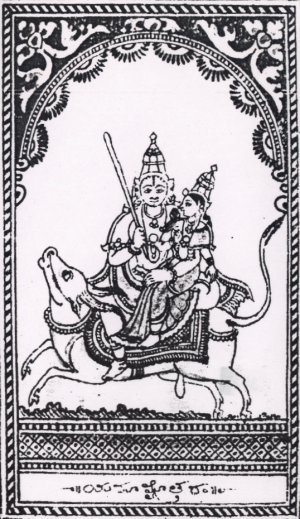 O You of powerful soul, who inhabit the subterranean house,
the Tartarian meadow of deep shadow and without light,
Zeus of the underworld, with the scepter, accept with a kind spirit these rites,
Plouton, who have the keys of all the earth,
who enrich the mortal race with the fruits of the year;
You who received as third part the earth, queen of everything,
seat of the Immortals, mighty support of the mortals;
You who have established the throne under the gloomy place
remote, tireless, without life, shadowy Hades
and dark Acheron, who holds the roots of the earth;
You who, thanks to death, rule over the mortals, o Eubouleos
much accomplished, who once the daughter of Demeter purifier
having taken in marriage snatched from the meadow across the sea
with the quadriga You brought in an Attic cave
in the territory of Eleusis, where are the gates of Hades.
You alone are the judge of the visible and invisible works,
possessed, all-powerful, most holy, wonderfully honoured,
who take delight in the noble priests and in the pure rites;
I pray you to come kind and pleased to the initiates.

Return to the Source of Harmony

I came, I saw, I photographed... follow me in the footsteps of Hadrian!

"Everything is full of gods." - Thales

"Graciously bestow upon all men felicity, the summit of which is the knowledge of the Gods." [Julian, Oration to the Mother of the Gods]

The spiritual tradition of Hellenism and Hellenistic philosophy.

following the path of Apollon

A Devotional Exploration of Ares, the God of War

Tales From The Under Gardener's Lodge

Thoughts on art, process and life in general

A Diary of the Greek Crisis