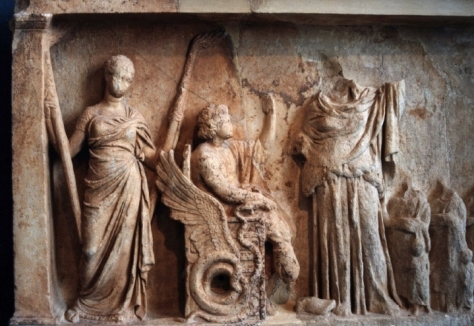 The final obstacle that the deceased faces in the journey to the Underworld is the judgment of the dead, which determines whether the deceased receives a favorable or unpleasant afterlife. The concept of differentiated lots for the dead does appear as early as Homer, in the famous punishments of Tantalus, Tityus, Sisyphus (in Odyssey xi 576ff.). In the Iliad, oath-breakers are tormented by the Furies underground after death (III.278; XIX.259. Plato attests to a well-known idea of punishment for misdeeds in the afterlife when his Cephalus describes how an old man near the point of death begins to wonder if there is any truth in the old “tales that are told of the world below and how the men who have done wrong here must pay the penalty there.” The first references to an actual process of judgment come in Pindar’s Second Olympian, where the “wicked souls straightway pay the penalty and some judge beneath the earth judges the crimes committed in this realm of Zeus, having delivered the strict account in accord with the harsh order of things.” Although the judge is unspecified in Pindar, Aeschylus makes Hades the judge of mortals when they come to His realm “Hades calls men to reckoning there under the ground.” (Eumenides 273–4) and in the Suppliants, this Judge is referred to as “Another Zeus among the dead [who] works out their final punishment.” (Suppliants 230–231, Plato has Socrates name Triptolemus as one of the judges in the afterlife (Apology, 41a): this points to an Eleusinian connection, as does the fact that Plato refers to this idea of judgment in the Laws as part of the patrios nomos (Laws 959b4). Plato also refers to the idea of a judgment as a palaiòs te kai hieròs logos (at Seventh Letter 335a3). Diodorus Siculus attributes the idea to Orpheus (I.92.3), which may also refer back to Eleusis; in any case, the doctrine of a differentiated afterlife is mentioned in the Homeric Hymn to Demeter 480–482, although the process of judgment is not specified. We may here recall Olympiodorus’s comment that, of the three nekyiai by Plato, the one in the Phaedo is about the places, the one in the Gorgias about those judging, and the one in the Republic about those being judged.

Socrates calls Triptolemos a demigod (hemitheos) and a judge (dikastes) of the Underworld. In the Apologia, during his final oration after Socrates is condemned to death by the Athenians, he claims his judges in the afterlife are better than this Athenian court of false jurors and witnesses:

“If on arrival in the other world, beyond the reach of these so-called judges here,

one will find there the true judges who are said to sit in judgment in those courts, Minos and

Rhadamanthys and Aeacus and Triptolemos, and all those other demigods

who were upright in their earthly life, would that be an unrewarding place to settle?”

Socrates thus adds a fourth judge, Triptolemos, who is not normally cited as one of the judges who determine the fate of the deceased, the other three being most commonly cited as those who judge between which souls will go to the fields of Elysium and who will not be so blessed.

Triptolemos “whose laws are even written down at Eleusis”- the daughters of King Keleos in the Homeric Hymn to Demeter 149-55 also call Triptolemos, (along with Dioklos, Polyxeinos, Eumolpos, Dolichos and Keleos) a man of great power, honor and wise, “guarding the city by wisdom and true judgments”. The epithet of Triptolemos is “wise” (pykimedes), although “shrewd” or “cautious” are perhaps better connotations where it is otherwise used in Odyssey 1.438. The idea of “true judgment” (itheiesi dikesin) “straightforward, fair judgment” (also used, for example, by Hesiod in Theogony 86 about Zeus with the aid of the Muses) supplies the precedent for Socrates in the Apologia but applied in this world instead.

Plato also mentions Triptolemos in the Laws 6.782b as the mediator of Demeter and Kore’s benefits: “the gifts (dora) of Demeter and Kore, which Triptolemos, or whoever it was, handed on to us.” Use of the word “gifts” can certainly be grain on the one hand, the usual interpretation, but we ought to remember that the Gifts of the Two Goddesses are not limited to the material world. That Plato’s use is plural is important, since as mentioned the surface gift is agriculture itself, but another gift may be only hinted at. As Isocrates (Panegyricus 28) also mentions not one but two gifts, the first gift being agriculture that allows humans to rise above animals, and the second gift being “sweeter hopes (hedious tas ‘elpidas) regarding the end of all life and all eternity.”

“Bounteous were the gliding wheels of airy Triptolemus.”

Return to the Source of Harmony

I came, I saw, I photographed... follow me in the footsteps of Hadrian!

"Everything is full of gods." - Thales

"Graciously bestow upon all men felicity, the summit of which is the knowledge of the Gods." [Julian, Oration to the Mother of the Gods]

The spiritual tradition of Hellenism and Hellenistic philosophy.

following the path of Apollon

A Devotional Exploration of Ares, the God of War

Tales From The Under Gardener's Lodge

Thoughts on art, process and life in general

A Diary of the Greek Crisis